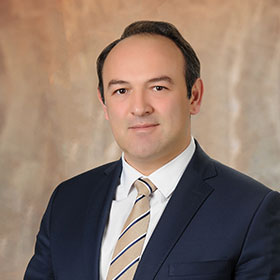 Korhan Tiryaki, has a bachelor’s degree in Civil Engineering from Middle East Technical University. Mr. Tiryaki started his career as a Project Representative at Limak Construction in June 2002 and worked until July 2004 in India. He served as the Planning & Project Controls Engineer at Baytur Construction in Russia between July 2004 and April 2005. Mr. Tiryaki served as the Project Controls Engineer at Ceylan Construction in Kazakhstan between the May 2005 and January 2009 and Project Controls Manager at Yapı Merkezı in Sudan and Gama Industry in Libya. He also worked as the Deputy Project Director at Unit International Company from July 2011 to December 2012 and Business Development Director at Samsung C&T Engineering and Construction Group from December 2012 to June 2018. He was promoted to Deputy General Manager at Samsung C&T Engineering and Construction Group in October 2019. Mr. Tiryaki was appointed as the Chief Operation Officer at Aydem Holding in November 2019.