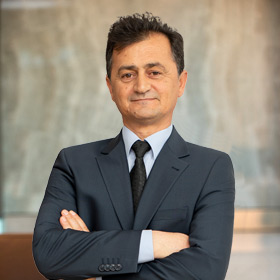 Hüseyin Günlü has a bachelor’s degree in Mechanical Engineering from Gaziantep University. He started his career in 1995 as site chief at Sojustest Metrology and Calibration. From November 2001 to August 2008, Mr. Ünlü worked as the mechanical maintenance senior engineer at Petkim Petrokimya Holding A.Ş. He subsequently served as a mechanical engineer at Botaş Petroleum Pipeline Corporation from August 2008 to August 2009. In August 2009, Mr. Günlü rejoined Petkim Petrokimya Holding A.Ş., where he worked as mechanical maintenance senior engineer from August 2009 to November 2011, central workshop manager from November 2012 to October 2016 and mechanic and civil support department manager from May 2012 to October 2016. Mr. Günlü served as project manager at PSG Engineering and Construction from May 2017 to October 2018, and worked as project and factory manager at Salt Project Machine from October 2018 to February 2019. Mr. Can has been working as the maintenance and project director at the Company since March 2019.