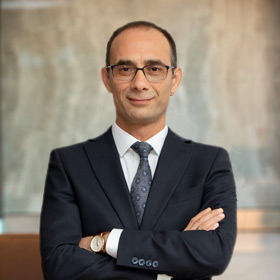 Hamdi Alp has a bachelor’s degree in Public Relations from Trakya University. Mr. Alp started his career in January 2001 at Reysaş A.Ş., where he served as cost control chief until December 2004. From July 2005 to October 2006, Mr. Alp worked as cost control and budget specialist at Dünya Göz Hospital, and from October 2006 to July 2009, he served as finance assistant manager at Medical Park Hospital. Mr. Alp subsequently worked as the finance affairs manager at Akfel Holding between July 2009 and October 2016 and the finance director at Isystems Industry from November to May 2018. Mr. Alp started working as the financial affairs group manager at the Company in October 2018, and was appointed as the financial director of the Company on August 2019 and was appointed as CFO of the Company in March 2020.